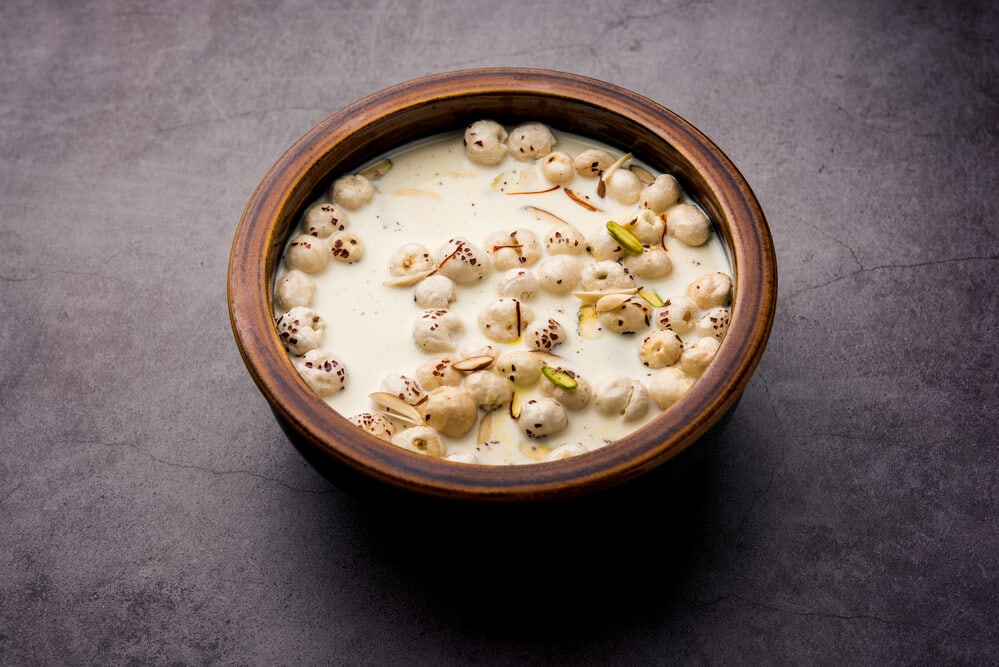 Whether you’re on a long hiking trip, or just spending time at home it’s often said that nuts are the undisputed snack companions. They are filling, healthy, tasty, and just munching on them is always a treat all on its own. Nuts are also a versatile ingredient when it comes to crafting up unique recipes that are sure to satisfy anyone’s palate.

One particular peanut variant has been growing a steady amount of interest from health-conscious individuals – the Makhanas or fox nuts as they’re more commonly called.

Makhanas are seeds of the lotus flower, the Euryale ferox, which is a type of watering plant classified in the water lily family. These plants usually grow in the stagnant water of wetlands or ponds in East Asia.

These edible seeds have become quite a staple in Indian cuisine, and they have also been used in ancient Chinese medicines. Thus, proving once more the sheer versatility of nuts in any shape or form.

Makhanas are highly produced in the state of Bihar in India, as well as other Asian countries such as Japan and Korea. A few parts of Eastern Russia have also cultivated these edible seeds, and they’ve been reaping all the fantastic health benefits.

Makhanas are known for the many health benefits that they bring. They are commonly consumed when fasting due to their nutritional value. The nuts are low in cholesterol, saturated fat, and sodium making them the ideal snack to satisfy one’s hunger pangs.

The delightfully munchy Makhanas are a popular aid in weight loss due to their low caloric content. The nuts are also a good source of important minerals such as calcium, magnesium, potassium, protein, manganese, and phosphorus.

Saturated fat is one of the many culprits of unwanted weight gain, coupled with high caloric content and the potential for overeating. There are various food items today that contain a mishmash of the bad stuff, which is why it is important to keep an eye on everything you consume when trying to lose weight.

Fortunately, Makhana is a superfood for weight loss. These nuts are low in calories and contain negligible amounts of saturated fat, which make them a great snack option when trying to stay fit and healthy. Moreover, Makhanas contain sufficient amounts of protein that can help one stay full for longer periods of time.

Makhanas contain a certain anti-aging enzyme that helps repair damaged proteins. The regular consumption of these nuts aids in the fight against free radicals.

The nuts also contain detoxifying agents that help flush out all the toxins from the body. Makhanas play an essential role in helping the detoxification of blood by cleaning out the spleen. Their antioxidant properties are essential health benefits that consumers could definitely leverage.

Due to their high magnesium and low sodium content, Makhanas can be beneficial to those who are suffering from high blood pressure, heart disease, diabetes, and obesity. Since they are rich in good carbohydrates and protein, they are great inclusions to a strict diet. Makhanas are low glycemic foods that can play a significant role in managing one’s blood sugar levels.

Makhanas have a lower glycemic index compared to other staple foods making them a snack you can keep having if you need to watch your sugar levels. The correct preparation of this highly nutritional snack also plays an important role towards delivering the right nutrients to its consumers.

Munching on Makhanas is fun and healthy, but they can also be used as an ingredient for delightful dishes. It must be noted though that preparing Makhana the right way is vital for maximizing its potential health benefits. Here are several recipes that you can try for yourself to elevate the Makhana food experience:

Dry Roasted Makhana: In a non-stick pan or griddle, place Makhanas and roast on a low flame until they appear slightly brown. Moderate the flame as necessary, but do not burn the nuts. Once the nuts are roasted, transfer in an air-tight jar and store in a dry place.

Makhanas Roasted With Ghee/Coconut Oil: For individuals who are not averse to a little bit of healthy fat, ghee or coconut oil can be added to the pan before roasting Makhana. Salt and chaat masala could also be added, but make sure to avoid adding too much of these artificial flavorings.

Sugar-Free Makhana Kheer: For individuals with a sweet tooth, Makhanas can also be prepared as a dessert. Dry roast the fox nuts until crisp, once dried the nuts should be cooled before blended coarsely in a grinder. Boil milk in a deep non-stick pan. Add dates and the coarsely crushed Makhanas once the milk boils. Mix the ingredients thoroughly and cook on a medium flame for about two to five minutes while stirring occasionally.

Makhana Raita: In a pan, dry roast the Makhanas for five minutes until they are crisp. Cool the nuts and store in a ziplock bag. Once stored, roll a rolling pin over the bag until all of the nuts are crushed but not powdered. Whisk yogurt in a bowl until smooth, and add chaat masala, salt, and the crushed Makhanas. Stir the mixture and serve with coriander leaves as garnish.

Makhana Curry: Boil onions, tomatoes, ginger, garlic, and cashews in a cup of water for five minutes. Grind to a fine paste once the mixture cools down. Dry roast Makhanas for five minutes until they are crisp. In a non-stick pan, heat ghee and add cloves, cardamom, cumin, and cinnamon. Once the cumin crackles, add the paste and cook for five more minutes while stirring in between.

Add masalas, and saute for one minute. Add a cup of water and let the mixture boil. Add the curd and whisk the entire time. Add the Makhanas and cook for two minutes while stirring. Only stop stirring once the gravy is absorbed, add more water if necessary. Finally, add garam masala and coriander leaves. Serve the dish hot.

Makhanas are indeed versatile and healthy nuts that are incredibly easy to incorporate to a lifestyle. Not only is this snack enjoyable to consume by itself, there are also various delicious ways to prepare it.

If you need a guilt-free snack that provides many health benefits, this superfood should become a staple in your pantry. You can find it in most vegetarian shops or you can order Makhanas online from a direct seller.

Try out the recipes we’ve suggested or get creative! The possibilities are endless, and trying Makhanas could be the best health decision you’ll make for yourself.